What a day! We were up at 0500 and underway by 0610. Of course it was pitch dar, but the bread crumbs on our chart plotter led us back out of the twists and turns we made entering our anchorage yesterday. That and John was stationed on the bow with a powerful light to help pick out the markers.

We re-entered the Gulf and just as the sun began to glow we were encased in thick fog. We definitely appreciate our radar's power to keep us safe even more now. We did encounter a sailboat that apparently did not have radar as it sailed blindly along. We could see it's blip on the radar as it approached so we blew our horn intermittently to warn it. It was just close enough to get our attention, but not a close call.

The fog finally dissipated to reveal calm seas that came even calmer- the water went from 1 footers to flat as the day went on. This is why we decided to make it a very long day and push on to the Keys. It's hard to pass up such beautiful conditions!


The auto pilot steered us for the entire 12-hour ride-- so glad we had it repaired in Fort Myers! We took turns taking naps, so there were always at east two of us watching for the ever-present crab traps. I don't think of those as a nuisance any more- I have redefined each one I see as crab cakes, crab rangoon, crab claws, crab fettuccine, crab bisque, etc. Yum!

John and Mark calculated the trip would take 12 hours, and they were exactly right. We went around Key West, passed Stock Island, and pulled in to the Boca Chica Marina at 6:15 pm. We are allowed to dock here because John is a retired Navy Commander- this marina is only for military folks. It is part of the Key West Naval Air Station at Boca Chica. A fringe benefit is the display of fighter jets we get to watch as the pilots fly their training runs. It is loud, but very cool to watch. And since it is hot here, we have our windows closed and our AC running, which muffles the sound. After docking we devoured burgers and fries at Navigators Bar & Grill, and made it to the blowing of the conch shell to mark sunrise on our dock, followed by docktails- until the no-seeums arrived. 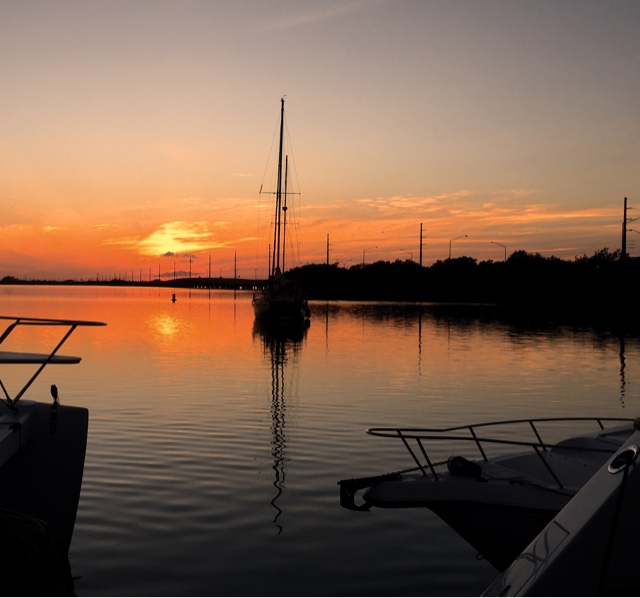 What a fantastic day! We plan to spend a few days here before heading up the Keys. We are like Mary Poppins- we have to leave when the wind changes!