The annual Gold Looper Reunion was held earlier this week here in Fort Myers. We are NOT Gold Loopers, since we have not completed the entire Great Loop- nor do we have any immediate plans to do so. (We joke that we are tan Loopers, since our originally white Looper burgee is showing its age.) At any rate, we know many Gold Loopers and enjoyed reminiscing about our shared experiences. Of course the best telling of tales happens over food and drink!

It has been a whirlwind of re-connecting with old friends and making new friends. Now, however, most of the Gold Loopers have gone home and things are settling down. It's almost time to start in on our lengthy list of boat chores.

Farmers Market is held every Thursday in Centennial Park near the yacht basin. In addition to a load of beautiful fresh veggies, we scored some wonderful pink shrimp, caught in the Gulf on Wednesday. Fresh shrimp are sooo delicious! 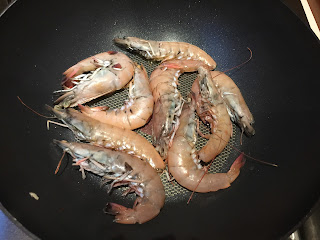 Our Illinois friends Pam and John arrived here in their new-to-them DeFever last week. Happily, they are docked right next to us. They changed the name of their vessel from Gondola to Short Vacation in an authentic renaming ceremony involving champagne shortly after their arrival. We were invited to participate.

You can't be too careful with nautical superstitions and rituals!

It's been quite a week!

It was a dark and stormy night...

...last night. Our weather alarms on two different VHF radios sounded shortly after midnight and continued until nearly 6 AM. We eventually decided to get up and get dressed and prepare to leave Mara Beel. Our only option was the marina restrooms. Storms always seem worse in the middle of the night when its impossible to see threatening clouds. (except during lightning flashes) We turned on the TV and watched the radar go from dark red to purple and black as at least one tornado hit the Sarasota area north of us. There were no rotating formations headed for Fort Myers, so we stayed on board, thankful that we had just thunderstorms and winds clocked at 58 mph. The Naples area south of us was treated to 85 mph winds, so we dodged a bullet. We were able to breath a sigh of relief and go back to sleep around 6:00.

In contrast, yesterday was picture-perfect! 80 degrees, a gentle breeze, beautiful blue skies... We hiked over to Publix for groceries in the morning. 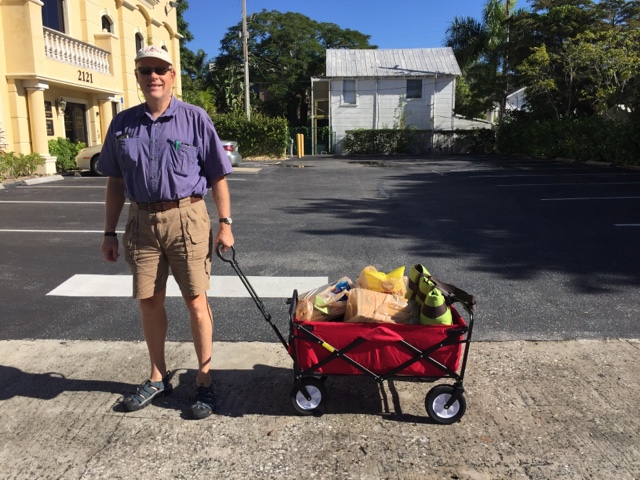 After lunch we walked to the Antique and Classic Boat Show at the Marina at Edison Ford. Pristine wood boats were on display- sure hope they all survive the night. On the way we passed by the Bacon Jam- a festival feature live music and foods prepared with bacon as a main ingredient. There's lots to do and see here. We walked over 6 miles total, and loved it!

Our friends John and Kathy joined us for docktails. They and many others are gathering here in Fort Myers for the annual Gold Loopers Reunion. We are not eligible to attend the event itself since we have not completed the Loop, but we are having a grand time re-connecting with friends.

We spotted this poor creature on a boat tied up near us. Don't miss the small sign on the rail. 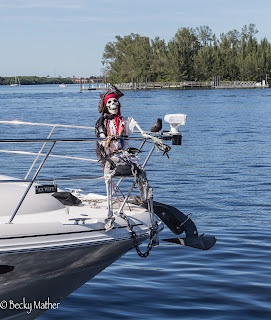 We enjoyed a leisurely 2 hour cruise to the City Yacht Basin in Fort Myers yesterday and are happy to be in our winter "home." There are lots of boats in this huge marine. and plenty of Loopers. 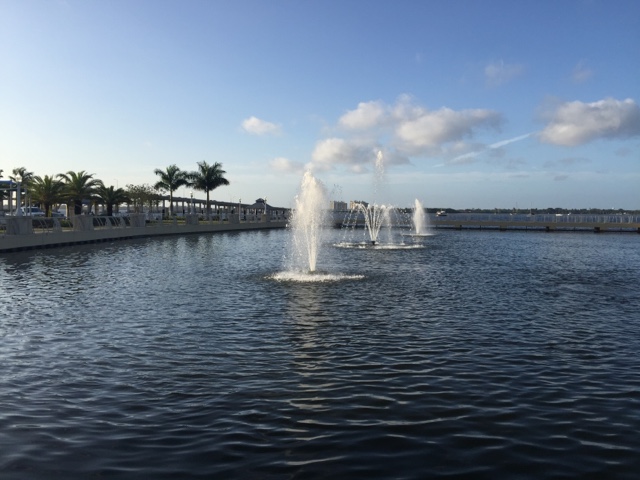 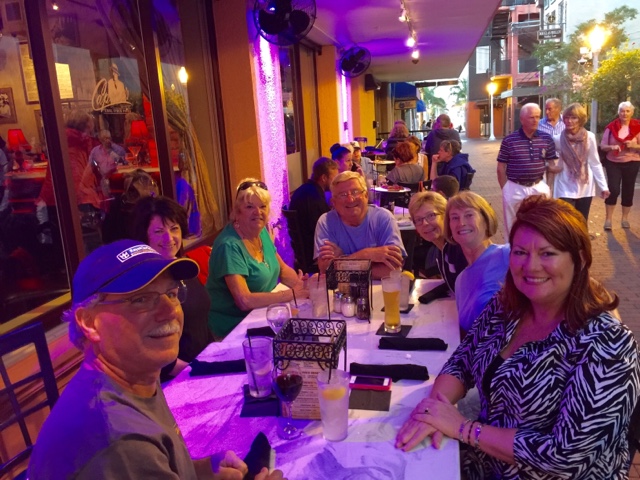 Dinner with friends at Capones. There is live music in numerous locations downtown on the 3rd Friday of the month.
Posted by Becky at 12:38 PM No comments:

We are docked right next to the Franklin lock in an RV park with 8 slips, much like the one at St. Lucie lock. We like this one a lot better! The grounds are immaculate, and their is a viewing platform for the dam. The best part is the $15/night fee. 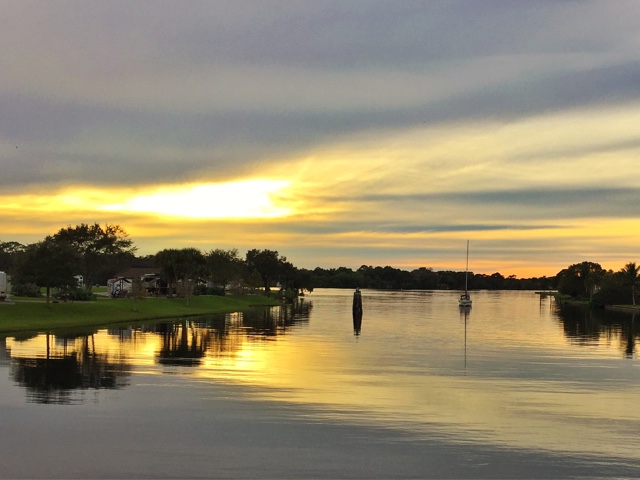 It didn't take Mark long to make new friends. (big surprise, I know.) But sometimes I am still amazed. He ran into a couple near their RV and got to chatting, of course. These folks are from Connecticut and their last name was the same as former patients of Mark's back in Muscatine. What are the odds that they could be related? Mark should buy a lottery ticket, because the Connecticut travelers are second cousin to his patients! How does the man do this? He naturally invited them to the boat for a beer, and even remembered (belatedly) to tell me he had done so.

Tomorrow we will move on to Fort Myers, a 12-mile run down the Caloosahatchee River that will take close to 2 hours. Then we will settle in for a couple months.

Another day, another adventure. We started early again today. Our first thrill was the Port Myaca Lock. The wind tried its best to slam us into the lock wall, but we avoided contact. It is a bit intimidating when the gate starts to open and a wall of water rushes towards our boat!

As soon as we exited the lock and entered Lake Okeechobee we were hit with strong north winds on the beam. Rolling back and forth from side to side is less than fun! We knew that would happen, so we turned south at green marker 5 and headed for red 54 on the south side of the lake. That eliminated the beam waves for the next hour. Turning west again at Pahokee, we were again rocked by beam waves- the worst were in front of the marina, The waves slammed into the sea wall and bounced back and hit us from the other side. Fortunately that didn't last long! The rest of the rim route is protected from north winds so it was easy cruising. We expected the rough ride and chose to travel today in spite of the conditions because the rest of the week is forecasted to be even worse.

The rim route is basically a canal, so the scenery is limited. There are plenty of herons, egrets, anhingas, and other birds. The gators were probably too chilly to make an appearance. The sugar cane fields on the south side of the lake are being burned this time of year. Thankfully the north wind blew the smoke from several fires away from us, but our boat was sooty by the end of the trip.

We passed through the Point Concern/Torrey Island bridge- the last hand-cranked bridge in Florida. We radioed the bridge tender, who rode his bike from one end of the bridge to the other to lower the traffic barriers. He then used a long pipe device and walked around pushing it to turn the gear and open the span. Amazing!


We passed through the Clewiston lock and right into our marina for the night. Whew! We are exhausted.

I'm We left Vero at 0730 today. Once again we had rainy weather. At least the rain kept many weekend boaters at home. We covered 51 miles in 7.1 hours, including several low bridges that had to open for us and a 30-minute wait for the lock.
We left the Atlantic ICW and entered the Okeechobee Waterway at the Crossroads near Stuart. This major intersection of the ICW, the Okeechobee waterway and the Stuart Inlet was not nearly as busy as it was the last time we passed by, even though several small boats were scurrying in from the sea in a race against the approaching thunderstorm.
15 miles up the waterway we locked through the St. Lucie lock, a 14-foot lift today. We immediately pulled into the St. Lucie campground. There are 8 slips here  and the 2 that were available were too narrow for us. A kind couple in a smaller vessel untied and moved to an adjacent slip to make room for us. Sweet! With a senior national park pass, a night's stay here is only $15! Much easier on the pocketbook than $83 tab last night.
Mark is in his socializing mode (when isn't he??) and quickly met a couple from West Point, IA, 10 miles from my hometown. Ben and Leah joined us for docktails- the first time they ever set foot on a boat! They are here in their motor coach. We discovered similarities and differences between these 2 modes of travel.
Another good day! 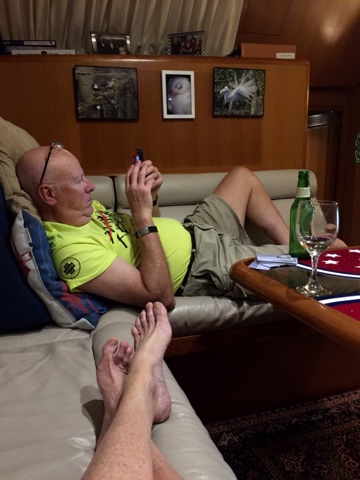 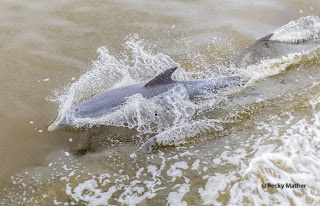 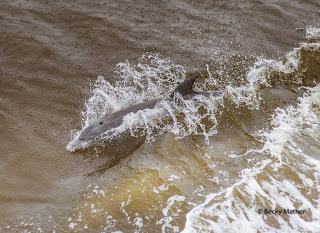 The Dolphins were showing off for us today! At one point 5 of them were following us. They are so much fun to watch. Someone told us the mullet are running now - dolphins are happy to grab an easy snack.

The tidal current was with us today- we covered 70 miles in just under 8 hours- sweet! We decided to anchor in one of our favorite spots this evening, in the Banana River just above Mathers Bridge. How perfect is that?!

We will continue to travel south tomorrow although we are having trouble finding a marina on the eastern portion of the Okeechobee Waterway. It seems that lots of boats are holed up at Indiantown and River Forest waiting for better weather. We might decide to spend a few days in Fort Pierce until conditions improve.

We had hoped to make Fort Pierce today but that didn't happen. We were delayed 3 hours by dense fog at our anchorage. We used the extra time to do a few boat chores, yoga, read and relax. We were entertained by numerous rowers on the river. We saw boats of various sizes, with crews of 1, 2, 4, or 8 rowers. Some crews looked more hard core than others.


These rowers even called to us, "Good morning, BIG boat!" This boat is a sweep boat or shell, since each rower has one oar. In the smaller boats, each rower has 2 oars. This sport seems to be extremely popular here. I would be prefer to be the coxswain!


The sun finally popped out, making this the warmest day of the week. We covered 40 miles in just in under 5 hours, docking in beautiful Vero Beach. 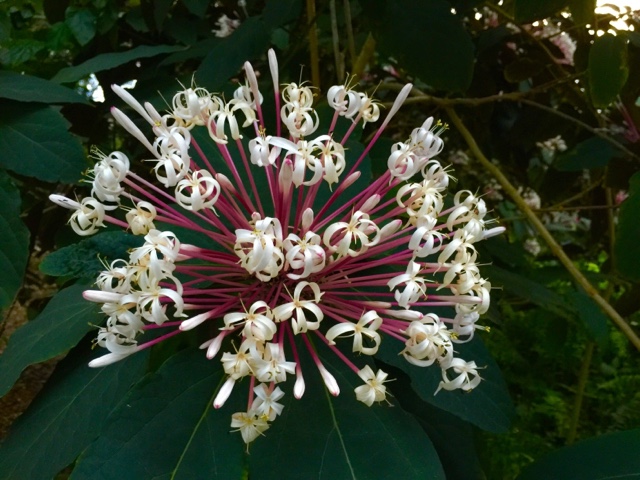 We saw this unusual tree on our walk.

We had a wonderful 6 weeks in Iowa with our kids and grandkids. Thanksgiving and Christmas were soooo much fun! It wasn't even very cold. 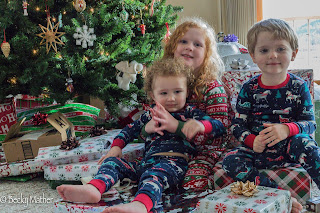 We flew back to Florida on the 4th and got re-acquainted with Mara Beel- which didn't take long! It's good to be back on the water. After dealing with several vehicle issues on land- 2 windshield cracks and a broken transfer case on our pickup- we once again realized that "dirt dwelling" can be a hassle. On the boat it's different concerns- such as forgetting to open the sea cock before starting an engine. Oops. It was time to change that impeller anyway.
C-Life pulled into the Palm Coast marina on Tuesday night, so we picked up Robert and Kay and had a delicious dinner at JT's Seafood Shack. Yesterday Serenity's crew- John and Kathy drove over from their dirt dwelling in The Villages, and Alice and Chris (Leslee) drove from St. Augustine for a lunch get-together at Captain's BBQ. We first met Chris and Alice in Apalachicola in November 2014 and had not seen them since.

This morning we left our dock in Palm Coast, where our boat spent the holidays at the private dock of fellow MTOA members John and Mary, who graciously allowed us to leave MB at their home while we were away. We enjoyed a pleasant 46-mile cruise to New Smyrna Beach. We are spending the night in the city marina, located near 2 small islands used by hundreds of pelicans, egrets, anhingas, and other birds as a rookery. Apparently it is a local tourist attraction.

Tomorrow we will continue to head south (hoping for sunshine).