I will not pooh-pooh this old adage again! We left Morningstar Marina on St. Simon's Island just before sunrise yesterday. Three different weather/wind web sites promised 1-2 foot seas with light winds all day. It seemed like a perfect day to cruise on the  "outside"- in the Atlantic Ocean. Doing so  saves time and miles, and avoids the shallow, tide-challenged cuts common in Georgia. Little Mud River, Fields Cut, and Hell Gate, to name a few, are nearly impassable at low tide for our 4' draft.

So we merrily untied our lines and left the marina oohing and ahhing at the beautiful sunrise. 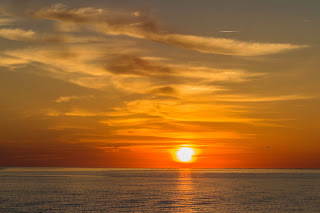 Just a few hours later the waves were 4-6 feet with occasional 8-10 footers. In case you were wondering, the trip was no longer enjoyable!! How could a day that started so gloriously go so wrong so quickly?? We were bouncing around like a beebee in a boxcar. No more photos- I needed both hands and both feet just to stay in my seat, as did Mark. We were bounced, pummeled, and beaten up for the next 6 hours or so. It was impossible to do another other than hang on. It seemed like the torture would never end. It was our most unpleasant day ever in 5 years of cruising.

Mara Beel performed like the champ she is- to be expected from an Ocean Alexander. (FYI- we are not going to buy another boat with "ocean" in its name.) Anyway, she handled the waves perfectly and the auto pilot held us on course with no issues. I hope we are never in waves that big again. Fortunately we were not bothered by sea sickness. The biggest casualty was the 5 bottles of beer that exploded in the cooler. In the cabin, things were scattered about, but not damaged. The outside of the boat was caked in salt- it went all the way up to the bridge. I know this is true because I got salt spray in my face through a tiny opening we had unzipped in the Isenglass.  Mark said this was the only time he wanted a bigger boat.

We were about 5 miles offshore, and came in Calibogue Sound and got back on the ICW. We spent the night at Windmill Harbor Marina on Hilton Head. Whew! We had lots to clean up but what a relief to be off the open sea! 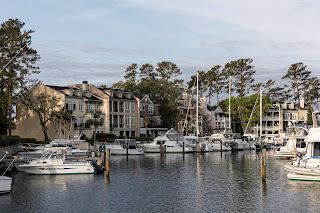