Yesterday (May 2) we said "hasta la vista" to the beautiful old city of St. Augustine. We thoroughly enjoyed our week in America's oldest city, but it was time to move on. We will visit again in the fall- can't get enough of the history, the architecture, the restaurants, the wildlife and the beaches of this beautiful area. There are more photos waiting to be captured!!

Memorial Presbyterian Church was built by Henry Flagler in 1889 in memory of his daughter Jennie Louise, who died shortly after giving birth to a daughter  (Marjorie) who did not survive. Henry, his first wife, Jennie Louise, and her baby are interred in a a marble mausoleum within the church. This incredible structure was built in just 361 days!

Built in 1695, the Castillo de San Marcos is the oldest masonry fort in the U.S. and the only standing 17th century military construction. It is also one of two forts built of coquina, a soft limestone composed of broken shells.  Coquina walls will absorb cannon balls, much like styrofoam will absorb a BB. The other coquina fort is Fort Matanzas, just south of here. 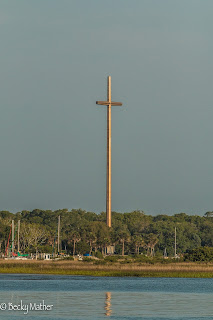 The Great Cross was erected in 1965 to celebrate the 400th anniversary of the founding of the city of St. Augustine. The Cross weighs approximately 70 tons and consists of 200 stainless steel panels in various sizes.

It was a long, hot cruise to Jacksonville. We fought the tide most of the day, which slowed us down considerably. It was hot and humid, with almost no breeze- ugh!  We covered 65 miles in 9 hours, proving that one hour by car equals one day by boat. Jacksonville is around 25 miles off the Intercostal Waterway, up the St. Johns River. It is a seaport, so we saw container ships unloading, but thankfully we did not encounter any of these fast-moving behemoths on the water. Here in Jax Mark and I looked at, and rejected the first boat in our 4-year, 14-state search for the perfect-for-us boat. That was in 2007, and we are very glad we took our time choosing.

We finally arrived at the Marina at Ortega Landing at 5 pm, well ahead of the thunderstorm that hit around 8:00. Mark and Pam had already moved the Shorts' van (not to be confused with a short bus)  here on Sunday, so we have transportation while we are here. Pam and I made a quick run to Publix (which I love almost as much as Hy-Vee) and picked up dinner. Publix offers a seafood bag which allows one to choose a seafood (mahi, grouper, shrimp, scallops, or lobster) and a sauce (Mango, Dijon, and others). The selections are placed in a bag, which we take back to the boat and bake for 15 minutes. Voila- a delicious seafood dinner that couldn't be easier!'

We are doing a split week at Ortega- 2 nights now and more nights later after we explore the St. Johns River. It is great to be traveling with good friends!