There are numerous advantages and disadvantages of downsizing boats. Believe me, we know all the pros and cons well. (We still miss our separate shower and walk around bed.) Today, however, we took advantage of our small size to travel the New Jersey ICW. We chose the "inside" route over the open water due to yesterday's bouncy ride and less than ideal wave conditions today. The ICW here is twisting and sometimes shallow- especially at low tide- and quite often a no wake zone.

We left Cape May two hours before high tide (0550) based on local advice and a call to TowBoat US and headed north- and south and east and west at times. We haven't seen this much winding around since the Tenn-Tom. Nevertheless, the water was smooth and easy. We had no problems with depth, but we would not have tried this route in our bigger boat.

Six hours later we tied up at Kammerman's Marina in Atlantic City. It's a small, old-school marina tucked in among casinos and larger facilities. Other than the casinos, there's not much here. The restaurant is closed this week, which is fine, because I like to cook, especially since I seem to have acquired a self-appointed sous chef. Mark's responsibilities include fetching needed ingredients from the "cave" and cooler, and drying dishes. He really is a great help! 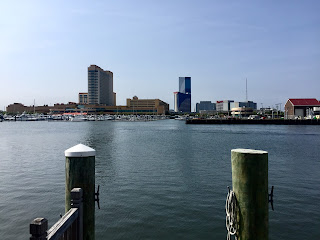 After our late lunch of Skillet Mac and Cheese we took a walk over to the famous Boardwalk. We found ourselves in a sketchy neighborhood and took a slightly different route back to the boat. The Boardwalk was underwhelming, at least in this location. 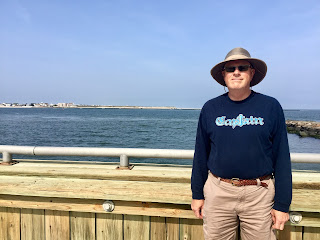 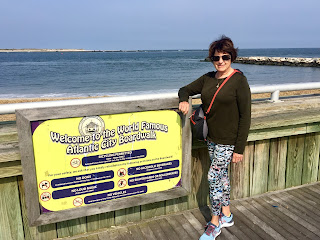