May 30- we left the Hudson River at Fort Edward and entered the man-made section of the Champlain Canal. We transited locks 5, 6, 7 and 8 going up in elevation while 9, 11 and 12 lowered us. (There is no lock 10) We also went through our first Guard Gate.

The biggest waves we saw this morning were created by a flock of Canada geese taking off. Barely a ripple showed otherwise.

We shared lock 12- the final lock on this waterway- with 2 Canadian sailboats. Both had their masts stepped (taken down and placed on wooden supports on their decks). Masts must be removed to allow the sailboats to pass under the fixed bridges. 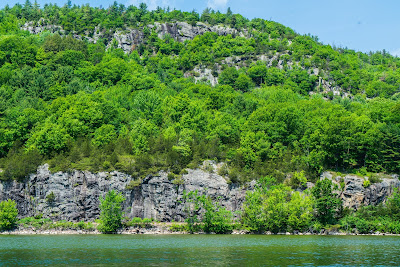 Fort Ticonderoga (formerly Fort Carillon) is a star-shaped fort built by the French, 1755-1757, during the French and Indian War.

There are several cable ferries crossing the waterway around here. These ferries move by pulling themselves along a steel cable. The cable lies on the bottom of the lake until the ferry’s progress pulls it up to the surface. We gave this ferry a wide berth.

The Champlain Monument and memorial lighthouse commemorates the 300th anniversary of Samuel de Champlain's discovery of Lake Champlain. The bronze statue is of Champlain, a fellow Frenchman, and a Huron native. It was a gift from the French government.

We are currently in Westport, NY, waiting out strong winds on the Lake- hoping to cross over to Burlington, VT, early tomorrow. Winds and waves are too intense for a crossing of the "broad lake".
Posted by Becky at 12:52 PM