Wow- what a storm over night Tuesday, Aug. 6! Lightning, strong winds, and heavy rain hit us around 1 AM, and since we knew the storm would be coming during the night we chose an anchorage that was protected from the south.  Even so, the guys were up for almost 3 hours keeping an eye on things. A sailboat got way too close to us and had to pull up their anchor and re-position during the worst of the storm. It is normal to swing from side to side a bit while anchored, but Mara Beel did a 360! We were never in danger, but we were very glad to have another Mark, this one a seasoned captain with us to reassure us.We learned later that the storms were very bad around Green Bay and other areas- luckily we were on the northern edge of it.

After all that excitement we slept in a bit and had a leisurely breakfast - the guys cooked bacon and eggs on the grill. Nice! Great food and minimal clean-up. 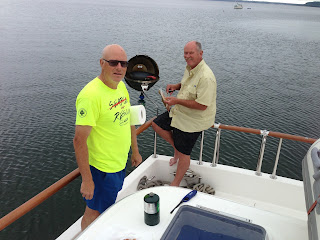 We left Nicolet Bay around noon and I "drove" most of the way back- and even called for a bridge opening on the radio. (I hate talking on the radio, for no good reason.) I pulled into our slip (with guidance form Mark C.) while Mark M. handled the lines. Our confidence is continuing to grow.

After a dinner of Pasta with Prosciutto, Kalamata Olives and Feta Cheese we walked up the street to Martin Park and the weekly Harmony By the Bay Concert. This week the group was Blue Chicago Summit. We topped off the evening with ice cream from the Door County Candy Store. I can personally vouch for "Caramel Collision." Wish I had taken a picture!