What a day! 95 miles, 13.5 hours, 5 locks, 67 bridges, of which 6 had to open to let us through, an electronic fish barrier, and dozens of crazy, unsafe pleasure boaters swarming around us. We traveled from Hammond, IN on Lake Michigan to Ottawa, IL. We left Hammond at 6 AM. Our route included the Calumet River, the Cal-Sag, the Chicago Ship and Sanitary Canal, the Des Plaines River, and finally the Illinois River.

We couldn't use our radar today, since our mast is down to allow us to pass under as many bridges as possible. Our AIS- Automatic Information System- has been wonderful! It identifies large commercial vessels and any other boats like us that have it, by name, heading, speed, destination, etc., and transmits the same information about us. We can see what's up ahead (on our chart plotter screen), radio towboats by name, and ask how they want us to pass- when meeting another vessel, a 1 whistle pass is port to port, meaning our left side to the other boat's left side. A 2 whistle pass is starboard (right side) to starboard. Usually they will say something like, "Pass me on the 2's, Captain." So we know we should stay on their right side. When overtaking another boat, its different, but I won't get into that now.

This part of the Illinois Waterway is very much an industrial canal-- a total opposite of the beautiful shores of northern Lake Michigan.The water is very narrow and lined on both sides with chemical, oil, coal, grain, you name it facilities. And bridges- bridges everywhere!


We had to be extremely vigilant the entire day to stay in the narrow channel, and avoid all kinds of things.

Asian Carp are making their way to the Great Lakes. This invasive species crowds out native fish. They are large, and frequently jump out of the water and onto boats, and have injured people in doing so. An electric barrier has been put in place to try to keep these fish out of the Great Lakes. 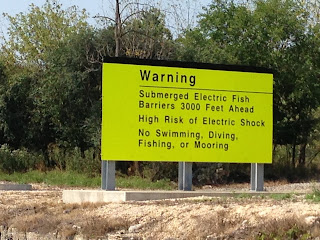 We turned off all of our electronic instruments so as not to damage them. Haven't encountered any Asian Carp so far, thankfully.


We locked through 5 locks- Thomas O'Brien, Lockport, Brandon Road, Dresden, and Marseilles. Almost all of these use floating bollards to tie on to, which we had not seen. The bollard moves with the water level. The biggest drop was about 40 feet.


In Joliet 6 bridges had to open for us. The bridge tenders were very friendly, and each bridge opened as we approached. Good thing we passed through here on a Sunday! We had planned to stay in Joliet overnight, tied to a wall in the city park. However, our friends on Help Me Rhonda stayed here 2 days earlier and told us someone boarded their boat at 1:30 AM! Rhonda yelled, and the person ran off. They did call the police, who went after a possible suspect. We decided to keep moving rather than stay here.

From here to Marseilles, we dodged reckless, unsafe boaters constantly. At first we slowed down, mindful of our wake, but smaller boats were putting out more wake than we were. Jetskiers were everywhere, and of course they love to cut behind us and jump our wake. Boats towed skiers and tubers right in front of us- we saw tubers without life jackets. It was like being in a swarm of bees for several hours. And it was HOT. The hottest day we have had.

Plan B was to stay overnight at Springbrook Marina. However, those people were less than friendly/helpful, if not rude on the phone. So we went to Plan C. It sounded OK- another lock and 10 more miles. So far we had gotten through 4 locks pretty quickly, and we can cover 9 miles in an hour, so we decided to go for it at 5 PM.

The Marseilles lock workers were almost surly. They made us wait 45 minutes even though we radioed ahead and they said we could get right through. It was even hotter now, and we were tired and hungry as well. Grrrr.

We talked to the folks at Heritage Harbor in Ottawa, and they were extremely helpful and courteous. They even offered to wait for us after their closing time to help land the boat. We already had a reservation here for the entire month of September, and had expected to arrive here on Tuesday. We arrived at 7:30 PM, and our friends from Help Me Rhonda  grabbed our lines as we docked. Added bonus- a pool and a restaurant at this marina! Lifesavers!

So we are here until the next leg of our voyage, October 1st. We are very pleased with Heritage Marina, and highly recommend it.